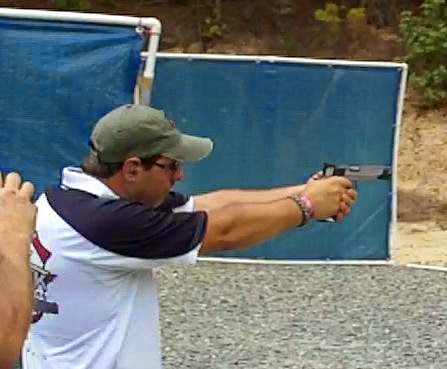 This year has been great…….! As I was getting ready for work this morning I was thinking about the past year. Not only have I been at my job for a year this past February, but my shooting has evolved as well.
Last year I went to the 2011 Florida Open with a bunch of friends, this was my first major match, and my first match out of the state. I went with no expectations except to have a good time and do a lot of shooting and that is what I did, I went in to the match in Single Stack as unclassified and won my division. What a high that was. Went to the SC Section and tanked. At that point I felt like I hit a plateau, I started thinking that my performance in Florida was a fluke and what the hell am I doing. I started feeling like I was in a slump and there was no light at the end of the tunnel, so I turned to one of my best friends and asked his advice. Well needless to say he helped me out with some tough love and got me back on track. I started learning how to read stages better and what I can and cannot do and learned to plan my stage accordingly. So the time came and I finally classified C in Single Stack USPSA.
Well you would think that was good enough, well when I get in to something I get obsessed. Not only did I have to do good shooting, I had to do it all. I have since become a NRA Pistol instructor, and I am an assistant instructor for a class every month. I have also gone through the IDPA Safety Officers class, and recently passed my USPSA Range Officers class. And in a few months I will be taking a class to become a NC concealed carry instructor.
So that sounds like a lot, and it is, but I am not quite done. As all of you know there is a new shooting sports game in town, ZSA or Zombie Shooters Association, it is a mix of USPSA and a little IDPA and is geared as an entry level in to competitive shooting sports. I have been involved with John and Mel from ZSA since the beginning and have helped in just about every match they have had in the NC area. Everything from pistol only, to 2 gun rim fire and 3 gun matches. Well since I have been very instrumental in helping out with everything, I have been appointed as the National VP of ZSA, assisting John Z with progressing the sport forward and making this a national level sport. We have been able to get matches going in about 5-6 states and more are on the list for this coming season.
So with all that I still get out every weekend and shoot one or two matches on the weekends and planning on hitting 4 or 5 major USPSA matches this year including Single Stack Nationals, as well as a few major IDPA matches held here in NC, and of course I will be at the ZSA Virginia State 3 Gun match in April.
So this has been one hell of a year and is looking to be another great year.
So come out to a match, bring your family and friends  and have some safe fun exercising your second amendment rights and help keep this great sport alive.
Posted by Ken Kiesler at 11:56 AM